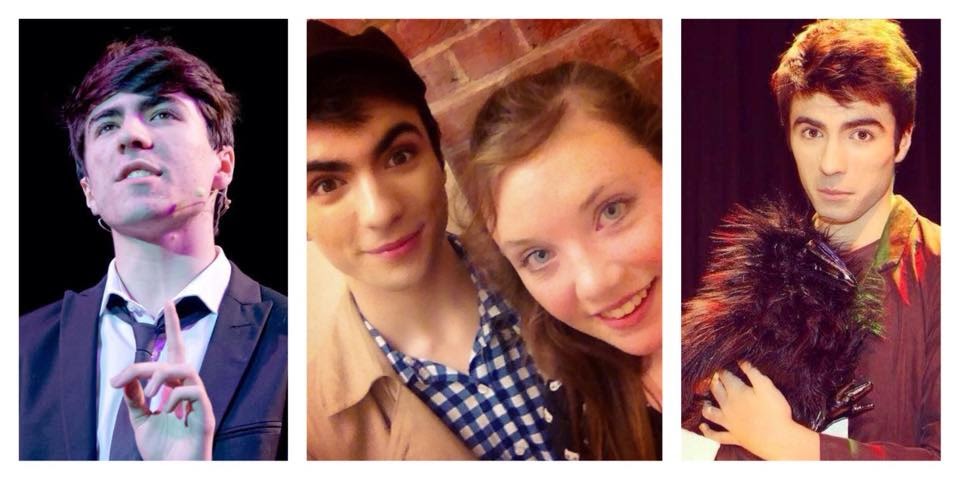 Shaun Nolan is a 16 year old aspiring musical theatre star from the UK, who has played roles such as Pearce (Half a Sixpence), Malvolio (Twelfth Night), Mr Toad (The Wind in the Willows) and Perchik (Fiddler on the Roof). More recently, Shaun has become the first official blogger for huge West End ticket company 'London Theatre Direct' - sharing theatre reviews and musings once a week via their website. He also has his own online base, known as "Shaunyland", comprising of a YouTube channel, and two blogs; "Shaunyland" and "Shaun's Musical Musings". AND HE'S ONLY 16! I happen to know Shaun personally, and when I asked him whether he would like to do an interview for my blog, his precise response was "I WOULD ABSOLUTELY LOVE TO!! Omg!!" So without further adieu, here is what Shaun had to say for himself!


What was the first thing that inspired you to 'get into' theatre?
I don't think I can really pinpoint the turning point necessarily because I don't actually remember a time when theatre wasn't the main focus of my life. I spent a lot of time when I was really young singing along to the cassette versions cast recordings and Disney things on my ELC karaoke machine (which was one of the best things I've ever owned) and I guess it's been like that ever since! I used to get taken to the local theatre a lot around the same kind of time so that really inspired me as well.


What is your favourite theatre memory?
I guess it's an obvious one to choose but I think my first trip to a proper London theatre is my favourite theatre memory. I'd been absolutely obsessed with Hairspray for a long while and on a trip to London with my Aunt and my Grandma, we stopped across the road from the Shaftesbury Theatre where the show was running (I think I was 8 years old at the time?) My Aunt rushed across the street and into the theatre, which was much to my shock because I thought that the front doors led right into the back of the auditorium...?! My Grandma and I hastily followed and much to my delight, she was collecting tickets for us to see the show that afternoon; it was truly the most happy and magical day of my life so far.


If you could play ANY character in ANY musical (regardless of race, age, gender, etc), who would it be?
This is such an ideal question that I think I'll have to go with two answers... If I could play any role in my own lifetime, I'd say Peter Allen from The Boy from Oz. It's such a fantastically moving yet high-octane show that I'd probably say it's my dream to star a revival (following Hugh Jackman's Tony Award-winning turn in the 2003 Original Broadway production). But if I could bend the rules of both age and gender, then I'd say Momma Rose from Gypsy. It's been one of my favourite musicals for donkey's years now and it's such an iconic and award-winning role featuring such an amazing catalogue of music that I think it's one of the best roles musical theatre has to offer.


Do you have a particular character that you feel you can relate to?
I wouldn't actually say I feel I can relate to any characters entirely, but I feel like I can find myself in many different characters; some bring out what I like to see in myself and some just bring out the harsh reality really. I find Eponine from Les Miz is perhaps the one that truly brings out the harsh reality in me and I probably find her the most relatable of any musical theatre character. Nothing moves me more than a rendition of "On My Own" or "A Heart Full Of Love" and her tragic story is one I like to journey with her if I'm feeling in an especially foul mood. I feel like characters such as Millie Dillmount from Thoroughly Modern Millie and Maria from The Sound of Music or Pippin from Pippin help me see the more pleasant side that I like about myself though; a naïve young person with ambition and drive who enjoys a good laugh.


What is the first show you were ever in?
I'd been a few roles in Christmas things in primary school that were semi-full musicals with the most notable one being Ralph the Reindeer in Ralph The Reindeer: The Musical when I must have been about 5; it was a story about Rudolph's brother who had a green nose instead of a red one. I actually remember my mum taking me to Woolworths, buying me a Rudolph costume and then putting green tissue paper around the nose and securing it with an elastic band! My first main thing though was when my primary school put on a full-length musical adaptation of The Wind in the Willows and I was Mr Toad. I think that was when I truly thought I was 'living the dream' (at the mere age of about 7!) I got two solo songs and I even got to have a prison cell that descended into my solo requiem scene from the ceiling... it was pretty bloomin' jazzy to say the least.


Do you have a particular show that you could keep going back to?

Miss Saigon for certain. I've always adored the music and now a massive full-scale revival is finally in my life, I find it just so irresistible; I feel like I'm at home every time I listen to the music or see the show. However, even though it's cliché, my original and truly heartfelt answer would have to be Wicked. I remember my mum getting me the cast recording maybe almost a decade ago now and falling head over heels in love. I'm not as obsessed these days, but I definitely feel so comfortable and true to myself when I experience anything surrounding that show.


If you could create any show for you to star in, what would it be and who would you have starring in it beside you?
This might seem a bit random but one of my dreams would be to star in a musical adaptation of the 1946 film "The Jolson Story" about Al Jolson. It's probably pretty racist now because minstrels are involved in the beginning of the story so that would have to be reworked, but it's about a Jewish boy's rise to fame and his turn on Broadway and stuff; it literally screams musical! Alongside my Al, I'd love to see Annaleigh Ashford take on Al's wife Julie and someone like Tam Mutu as Al's manager because he plays older roles like that so well - granted I might be a bit young next to these two though but we'll see!


What are your theatrical aims for the future?
I'm very busy with school over the coming few months but I do have a few performances of songs lined up. I'm eyeing up a local production of Rodgers & Hammerstein's Carousel for this Winter though and I have a couple of other secret things I'm working on that should immortalise come Summer/Autumn time which are very exciting! As for the long distance future, I'm driven towards my dream career in the theatre and especially on the New York stage if possible; let's see where my passions take me!


I'm planning to do more of these interviews in the future, so do let me know if you like this style or if you have any ideas! (ooh also who likes my new blog layout?)
Posted by Em at 15:40