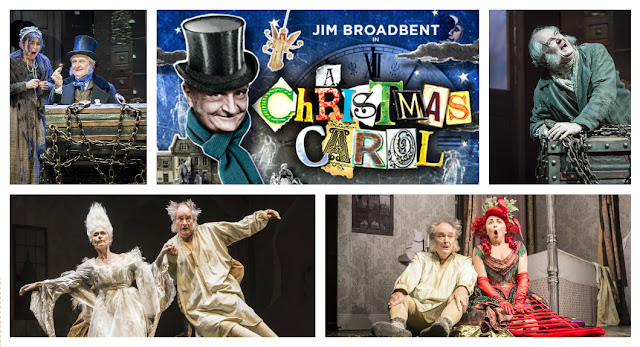 I'm writing this, as I so often do, on the train home from London, after seeing a show. This time, the show in question is A Christmas Carol, which is currently playing at the Noël Coward theatre, starring Jim Broadbent as Ebenezer Scrooge. This particular version of the show started Off-Broadway in November 2013, and then made the move across the pond just in time for this Christmas.
For those who haven’t seen it or read about it, the play features just five actors, who manage to bring to life every single character - including Tiny Tim, who is actually a puppet in this adaptation! Despite the fact that A Christmas Carol is a Dickens novel and therefore quite a serious story, the play could almost be described as a comedy, partly because of the way certain lines were delivered and partly because of the amount of physical comedy involved - at one point, for example, as people walk into Scrooge & Marley’s shop, an ensemble member throws (fake) snow over them just before the door opens - the audience an see the snow throwing, but Scrooge can’t! Another example of this physical comedy was when the Ghost of Christmas Past and Scrooge were flying between scenes in Scrooge’s past, two ensemble members would come on, place fake legs in front of Scrooge and the Ghost’s legs, and dangle them around as if they were flying - obviously, you could still see their real legs, but it was VERY funny, and, by about the 3rd time they did it, the audience knew what was coming, and it got increasingly comedic!
I was very sceptical about the set at first - it is quite literally a proscenium arch underneath another proscenium arch (yeah, weird!). The smaller arch is covered in beautiful illustrations, some of which are from the original book in 1843! Within this arch is a rotating circle (à la Les Mis!) - as it rotates, it reveals a different scene - either Scrooge and Marley’s shop, Scrooge’s bedroom, Fred’s house, Scrooge’s money room, and Bob Cratchet’s house. When I first saw it I thought “oh here we go, here’s somebody trying to be clever” but actually, it was very clever an worked really well!
Jim Broadbent was absolutely born to play Scrooge. There can be no question on the matter. Every syllable in every word in every line was spot on. Bravo, sir!
The one thing that drove me up the wall was the group of teenagers on a school trip, who were sat quite literally all around us. Obviously being a teenager myself, I wouldn’t usually have a problem with people being young, however, when you blatantly drop your empty Sprite can on the floor just before the interval, and then disappear, I immediately lose any respect I ever had for you.
Exhibit A: 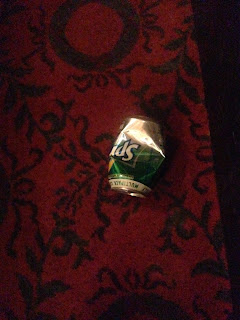 A Christmas Carol closes this weekend, so if you want to see it you’d better be SUPER speedy! I would highly recommend it, if you’re in London with an evening to kill! https://www.londontheatredirect.com/play/1668/A-Christmas-Carol-tickets.aspx
Posted by Em at 07:00