"Grease Is The Word!" - My Thoughts on Fox's 'Grease Live' 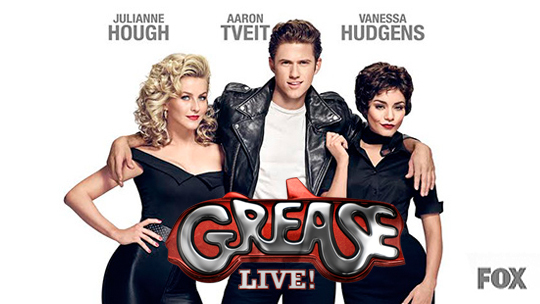 If you're relatively up-to-date with current theatre news, you'll know that on Sunday night, Fox aired a live version of everyone's favourite 70's movie, Grease!
To be perfectly honest with you, I wasn't expecting to like it - I'm a huge lover of the original movie, and I was a dancer in my school production of it last February, so I was prepared to be disappointed. On reflection, however, I can safely say that I absolutely adored it! I wasn't sure if it would be more like the movie or the stage show, but as it turns out it was a perfect blend of both, so I was happy on that front!
In my ever so humble opinion, the casting was absolutely spot on - Julianne Hough was absolutely spectacular as Sandy, and, well, let's just say I didn't have a problem looking at Aaron Tveit's face for several hours! Jokes aside, though, Tveit is not just a pretty face! He's an impeccable singer, dancer, and actor, and comes across as just a genuinely nice person - making him the perfect Danny Zuko! I thought that Vanessa Hudgens was absolutely incredible, as always, but even more so considering her sad situation - what an inspiration.
My mind is still completely and utterly blown by the sets and the slick transitions between them - especially the fairground at the end, which was an ACTUAL, REAL-LIFE FAIRGROUND!
I feel exactly the same about the costume as I do about the set - they were perfectly true to the original movie, for a start, and the show included some ridiculously fast costume changes - sometimes mid-song! (Side note: For some reason, I absolutely adored Patty Simcox's dress in the Hand Jive scene - I just thought it was absolutely gorgeous!)
Zach Woodlee's choreography, although very different to Patricia Birch's original work on the movie (which was based on the Broadway choreography!), was absolutely incredible! I loved the fact that in We Go Together, there were elements of what seemed almost like street, as well as some amazing tricks/lifts/etc in Greased Lightning! Talking of Greased Lightning, that was definitely my favourite choreography of the entire thing, and probably some of my favourite choreography of all time, actually! When my mum and I were watching it back last night, we noticed that a lot of it seems very West Side Story inspired... Take this moment, for instance!

I was pleasantly surprised to see that they included my favourite song of the whole show, Freddy My Love - and what's more, Keke Palmer did an absolutely stunning job, somewhat unexpectedly! I was expecting Marty's entire character to be just as overlooked as she is in the movie (if you've seen or been in the musical, you'll know what I mean!) but, all things considered, she was given a pretty decent dose of screentime, and she certainly made use of it!
The only two parts that I didn't particularly enjoy were Those Magic Changes and All I Need Is An Angel - I just thought that Those Magic Changes was far too 'soul-y' and All I Need Is An Angel was just really bland, and didn't really belong. That said, however, Those Magic Changes is growing on me slightly after listening to it again over the past few days. (I'm still loathing All I Need Is An Angel, though... Sorry Frenchy!)
Overall, I thought it was the best 'TV musical' ever, and I think this text conversation with Shaun sums it all up: 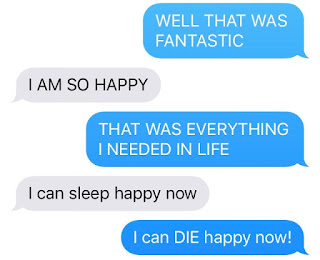