London Shows That SHOULDN’T Be Closing 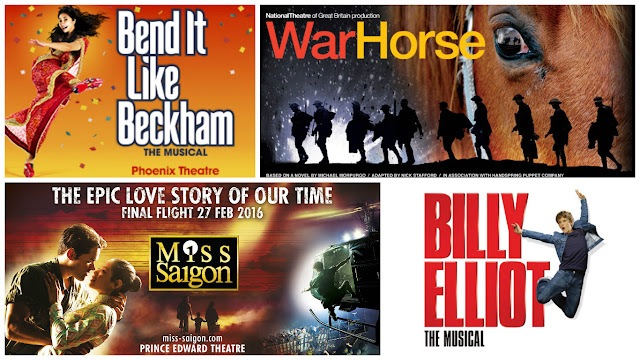 Happy Tuesday everyone! Today I thought I'd talk about four West End shows with impending closing dates - and why I think these particular shows shouldn't be closing! And so, in chronological order...

Miss Saigon
Miss Saigon is my favourite musical. There. Said it. I love absolutely everything about it, from the set to the score to the direction to the cast... Everything! It is so relevant to the world at the moment that it would seem completely ridiculous to close it if it weren't headed over to the Great White Way next! I'm still devastated that it's closing though - I managed to get tickets for the very final show, however, so at least I'll be there until the very end!
Miss Saigon closes on February 27th.

Bend It Like Beckham
I must confess, I haven't actually seen Bend It Like Beckham as of yet, but from what I've heard, it is absolutely fantastic! Several people have said to me that it was their favourite show of 2015, and it got brilliant reviews, so it makes me really sad to see such a well-received show go so quickly!
Bend It Like Beckham closes on March 5th.

War Horse
As I mentioned in my review of War Horse, I'd wanted to see this show for years, but only got around to seeing it this January. The puppets, from the Handspring Puppet Company of South Africa, are quite clearly one of the best things about the play, not to mention amazing singing, acting and set design! War Horse is something that I'm sad I won't get to see twice - and in my opinion, there are thousands more people in this country who would love it!
War Horse closes on March 12th.

Which is your favourite show of these four? Tweet me @ohmymusicals and see if we agree!
Posted by Em at 21:00