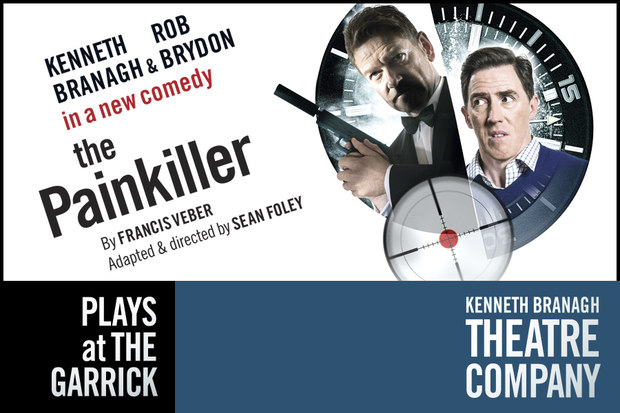 The Painkiller is a funny play. There’s no doubt about that. Kenneth Branagh and Rob Brydon are fantastic actors. There’s no doubt about that either. But there’s something about this play that makes it just a little bit awkward to watch… And I can’t quite put my finger on it.
That introduction was a bit harsh and dramatic - I did actually really enjoy The Painkiller, but it was just a little tedious and downright frustrating to watch. Personally, I’m putting that down to some good old fashioned dramatic irony; the audience can see the giant rifle in one room, but the characters in the adjoining room have no idea. That, and the fact that I have never seen such terrible stage fighting in my life - and I’ve seen some bad stuff, let me tell you!
To say it was laugh out loud funny would be true, but potentially an overstatement too - there were certain points where I properly laughed, but I’m one of those people who laughs at absolutely anything (and I’d had a bit of a giggly day anyway!), so that’s probably not a fair judgement!
Earlier on I used the word frustrating - it’s frustrating to watch because there are so many opportunities for the characters to make decisions or say things that could end the entire affair, but instead they do the complete opposite without justification. Doing the opposite of something that could solve the problem could (and would) be funny if there was reason behind it, but there hardly ever was, so it felt like the story only existed for the sake of continuing the play!


Overall I thought it was a funny piece of theatre (funny haha not funny peculiar!) but it was just a touch on the am dram side. I’ve got my hopes set high for Romeo and Juliet this summer, but after seeing two somewhat disappointing plays in the Kenneth Branagh season already, I’m not convinced it’ll live up to my expectations.
Posted by Em at 07:03