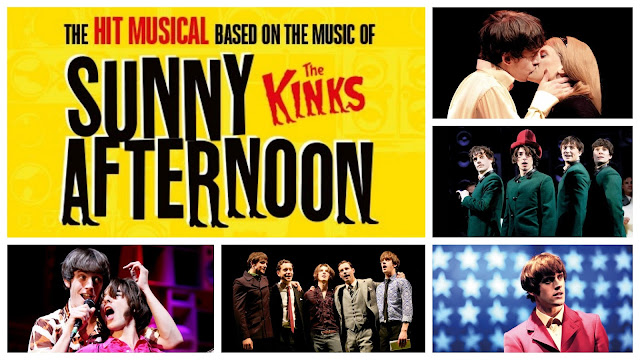 Sunny Afternoon, for the last year or so, has been one of those shows that I haven't been particularly bothered about seeing... Until last month, when the opportunity (quite suddenly!) arose, and I decided to go!

I have to admit, I did go in with pretty low expectations; although it won 4 out of its 5 nominated Olivier awards last year, there hasn't really been any buzz about it since, and the only things I've heard or seen about it are the big posters at Marylebone station! Despite all this, however, I had a really really good time!

Written by Ray Davies, and featuring music by the Kinks, Sunny Afternoon tells the story of the Kinks from the beginning. The fact that Ray Davies wrote and focussed what is quite a tough story on himself makes it very honest and gritty - this kind of true story isn’t something that we get to see very often in theatre, making it incredibly refreshing to watch.

For a start, Sunny Afternoon is a classic feel good musical - as jukebox musicals so often are - but this time it didn’t feel forced. In Thriller Live, for example, I sort of felt obliged to get up out of my seat, dance and look as if I was having fun, but when, during the finale of Sunny Afternoon, my friend Shaun nudged me and said “Come on, shall we get up?”, I could think of nothing I wanted to do more!

With that in mind, it’s the right combination of funny and serious - you’ll get a light hearted joke about music or Britain or the 60’s, directly followed by a slightly shady remark about politics or the future - or in some cases, a really emotive song. I think my favourite section of the show would have to be between (and including) ‘Days’ and ‘Lola’ - simply because of the huge feeling of nostalgia that it gives me for no obvious reason; I’ve never been a particular fan of the Kinks, and hardly listened to their music growing up, so in my eyes this intense nostalgia can only have stemmed from the emotion that is pumped into the show’s very roots, and the same emotion that keeps it on your mind for weeks to come.

Another thing which was spot on was the casting - despite me not being able to get over how much Danny Horn (Ray Davies) looked like Luke Skywalker from Star Wars, every single person looked like they were having the absolute time of their life - something which is really lovely to see!

Sunny Afternoon, in my opinion, is a jukebox musical done right - imaginative set, energetic & talented cast, and a beautiful narrative - what more could a theatre lover want from a show?