It's the third day of Interview Month, and today my special guest is none other than the fantastic Matthew Malthouse, star of Matilda, Mrs Henderson Presents and Mary Poppins! (to name just a few, that all happen to begin with M!)

Em: If you could play any role (regardless of age, race, gender, species etc) in any show, who would it be and why?

Matthew: I would love to play Buddy Holly in Buddy. I worked front of house on it years ago and fell in love with his music. Or Nathan or Sky in Guys and Dolls, i would love to be in that show in any capacity. Em: If you could create a show for yourself to star in, what would it be? (Could be an adaptation of a book/fairytale or an original story)

Matthew: I think you could create an amazing show weaving all the Rodgers and Hammerstein dream ballets together. Using their music and creating narrative around it. The success of An American in Paris proves audiences are receptive to that much dance in a musical. I would get Matthew Bourne, Drew McConie or Stuart Winter to choreograph it. Em: Who were your main theatre inspirations when you were growing up?

Matthew: Easy, Gene Kelly in my mind the greatest dancer of all time. Style, dynamic and danced like a man. Em: What is your favourite theatre memory?

Matthew: I have a few, the first ever performance of Matilda was pretty special. We had all worked so hard rehearsing for months, technical rehearsals of 12hr days for 5 weeks. The first preview the show was over 3hrs long but the audience still went crazy, as a cast we knew we were part of something very special. Or my opening night as Edward Scissorhands, it was at Sydney Opera house. I cried the whole way through my bow.
Em: What is your favourite quote from a musical?

Matthew: 42nd Street - " You're going out a youngster, but you got to come back a star"
Em: If you could travel back in time and see any musical on opening night, what would you see?

Matthew: Parade at the Donmar, I never got to see it and I still regret it.
Em: If you could pick any actor or actress to be in a musical with, who would you pick?

Matthew: Oliver Tompsett - we are good mates but have never worked together. It would be laugh! Although I wouldn't want to sing a duet with him, I would feel very substandard.
Em: If you were stuck on a desert island with a book, a musical soundtrack and one character from a
musical, what would they all be?

Matthew: I've given this careful consideration and taking the assumption I am on said island a while... I would take The Count of Monte Cristo to read. Soundtrack to Jesus Christ Superstar, and I would like to be joined by Mary Poppins as she is practically perfect!
Em: What's the weirdest/most obscure role you've ever played?

Matthew: One of my first jobs was Beauty and the Beast, I played a salt pot. I understudied the role of Cheesegrater but sadly never got to perform it!
Em: What are your hopes/dreams for the future? What's next for you?

Matthew: I am happy to just keep working, that is half the battle in a competitive industry like this. There are a few directors and choreographers I would love the chance to work with, but we shall see.

Em: Is there anything else you'd like to say to my readers?

Matthew: I think the most important thing is to go watch theatre, lots of different types of theatre, fringe shows, plays, small musicals, don't watch the same Broadway transfer 30 times, expand your knowledge. You will be amazed what you will enjoy. One of my all time favourite shows the lead character was a red balloon. 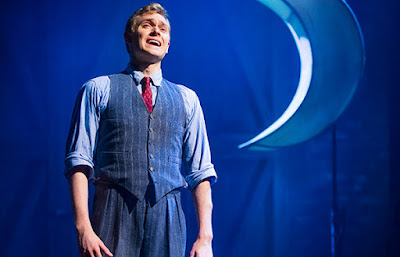