Earlier this week, I had a chat with a lovely lady named Lauryn, who is the writer of a new show called Big Shot, which is making it's UK premier at the Camden Fringe next week! Here's what she had to say for herself...

Em: To start off with, what can you tell us about the storyline of Big Shot?

Lauryn: Basically, it is about a big shot lawyer who lives in New York City, and he’s never lost a case in his life, and he ends up taking on a case for murder. So it’s a big case which he takes on, bit of a risky one, but he goes to this coffee shop every day for his coffee break, and he goes there on his own but there’s a girl who works there who’s an artist. So he gets talking to this girl, but he soon realises that she’s actually got a fiance, so he’s got a bit of a dilemma!

Em: I think I’m right in saying you did a few show in America, and one in Mexico - what made you choose those places?

Lauryn: Erm… I don’t know! I think I saw San Diego Fringe online, and then I applied and we got in, so that’s kind of how that happened I guess!

Em: What inspired you to write the show - were you always interested in writing?

Lauryn: Yeah, I was always interested in writing music, I always wrote a lot of songs and stuff, but I never thought about writing scripts! Then when I started writing the music for this, I was like “this would work more as a musical sort of thing than an album work” so that’s kind of how the musical came about!

Em: So the show is at the London Irish Centre from the 15th to the 20th of August - what’s next after that?

Lauryn: Um, Broadway! (*laughs*) That’s the dream obviously, I mean we’d love to, like, do a tour or something! I guess we’ll see what happens, whether we pick something up!

Em: Is there anything else you’d like to tell my audience?


Lauryn: Erm, that it’s kind of, a really original sound, it’s quite modern. And just to come see it! Oh and there’s a live band as well, everyone loves a live band!

That's all from me today - you can catch 'Big Shot' at the London Irish Centre as aprt of Camden Fringe from Monday to Saturday next week! To find out more, check out their Twitter page here. 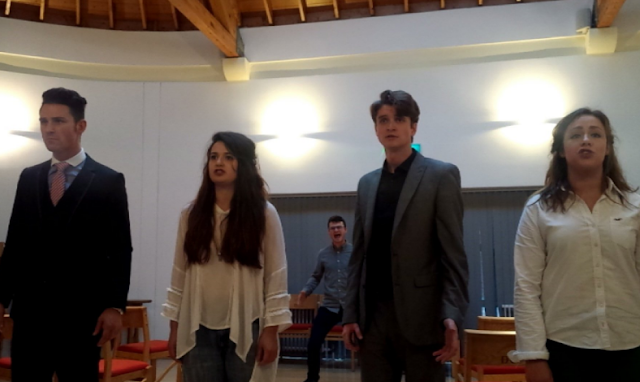 The cast of Big Shot in rehearsals.