An American in Paris - London's Next Big Thing?

Earlier this month I was lucky enough to be invited to the press launch of 'An American in Paris' - the 1951 MGM movie that became a Broadway smash hit in 2015, and will be coming across the pond in March 2017. I know what you're thinking - March 2017? Isn't it a bit early to start talking about it? In a certain sense, you'd be right - I must confess I was a little surprised to be invited, but actually once I got in, it all felt very well-timed and gave a good time-frame for the run up to the show - obviously the cast have not yet started rehearsals, so they were all as excited as we were (well, certainly as excited as I was... I can't speak for anyone else!). Despite their lack of rehearsal, a few of the cast members, (namely Ashley Day, Zoë Rainey, Haydn Oakley, and David Seadon-Young) had put together a beautiful medley of S'Wonderful - and judging by the standard of that, the show is sure to be incredible!

Let's have a chat about the press launch itself - I generally don't tend to consider myself as press - largely because I'm only 16 and writing about theatre is simply not my day job - but on this occasion I was happy to float along with the façade of "yes, I'm very professional and I know exactly what I'm doing". The event started with a presentation from Darcey Bussell, during which she spoke a little bit about her experience working with Christopher Wheeldon (director and choreographer of An American in Paris) in her younger days at the Royal Ballet, after which she introduced the man himself. After a little bit of what was effectively just faffing about onstage (don't get me wrong, this was Darcey Bussell doing the faffing so I loved it!) they introduced the aforementioned cast members who came on and did their rendition of S'Wonderful - which really was "s'wonderful"! We then watched the trailer (on a big cinema screen, how exciting!) as well as a brief video message from Robert Fairchild and Leanne Cope, who will be transferring from Broadway with the show after it closes in October. As if this little screening extravaganza wasn't enough, I was then lucky enough to be taken up a somewhat ominous staircase, to do some video interviews with Zoë Rainey, Haydn Oakley, and David Seadon-Young! (these videos will be up on Sunday 25th and Wednesday 28th September)

Now, I've actually already booked my tickets - I booked them when it was first announced that the show was transferring - but if you haven't already, I implore you to do so; the trailer alone is enough to make you want to become a prima ballerina! If you'd like to see the interviews I did for LondonTheatreDirect with Shannon Rugani and Bradley Schlagheck from the Broadway production, click here!

I love An American in Paris, and can't wait to see this beautiful production (that I missed out on when I was in New York!) be brought to the West End. I'll leave you with this photo of myself and a HUGE An American in Paris poster at JFK airport last summer! 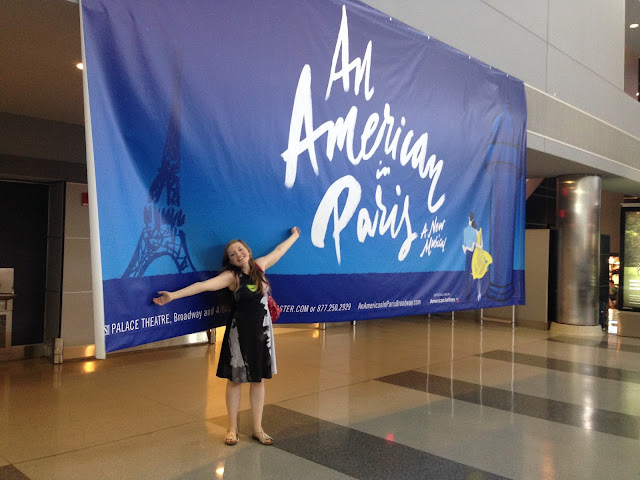