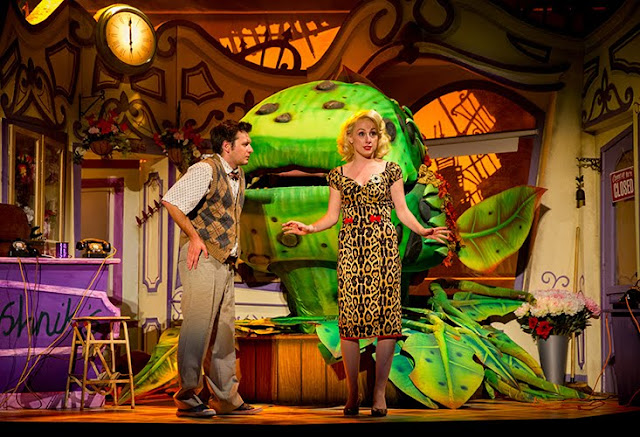 Last night I headed down to one of my nearest regional theatres, the Aylesbury Waterside, to see a show I've been dying to see for a while: Little Shop of Horrors! Aside from having heard a couple of songs, I only properly discovered Little Shop last summer, after doing the opening number in a summer showcase with my musical theatre class - I went home, watched the film, and I've adored it ever since! When, earlier this year, I heard that 'Sell A Door' Theatre Company were going to be touring the UK with their production of it, I was thrilled - so imagine my delight when they announced that Sam Lupton, one of the first people I interviewed and someone who I really look up to, would be playing Seymour Krelborn, one of my favourite musical theatre characters of all time! 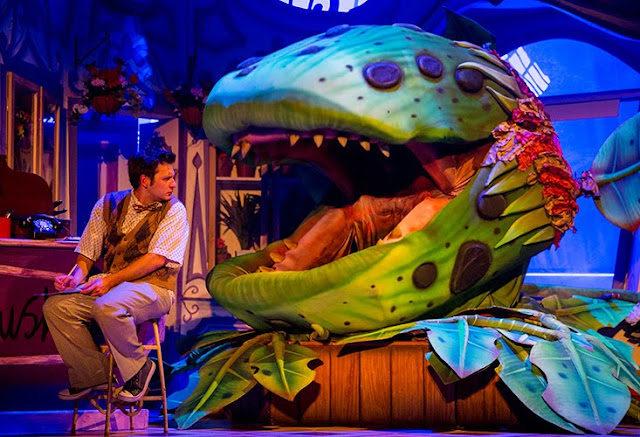 Sam, of course, did not disappoint - in fact, he gave what I can quite easily say was one of the best performances I've ever seen! He gave an outstanding rendition of 'Suddenly Seymour' along with Stephanie Clift (Audrey), and throughout the show, Sam managed to strike the perfect balance of awkward and funny, while Stephanie managed to have the classic squeaky squealing Audrey voice, without having that awful screechy, tinny sound she has in the movie - which I'm guessing is no mean feat (and her singing voice was simply gorgeous!). From watching them on stage, you could tell that they got on well off stage too, which is always lovely to see - and, upon reflection, I felt the same about Mushnik's relationship with Seymour (the former played by Paul Kissaun).

One thing I didn't realise before seeing the show is that Sam Lupton can really dance! (I fear that this review is becoming a bit Sam-heavy, but he really does deserve it, promise!) It wasn't really until Don't Feed The Plants that I suddenly thought "oh, it's not just the 3 girls who dance in this show, it's everyone!". another thing that i hadn't perhaps considered was the amount of costume changes that poor Stephanie Clift (Audrey) had to do! I've done my fair share of pantos, but that was fast even by my standards! 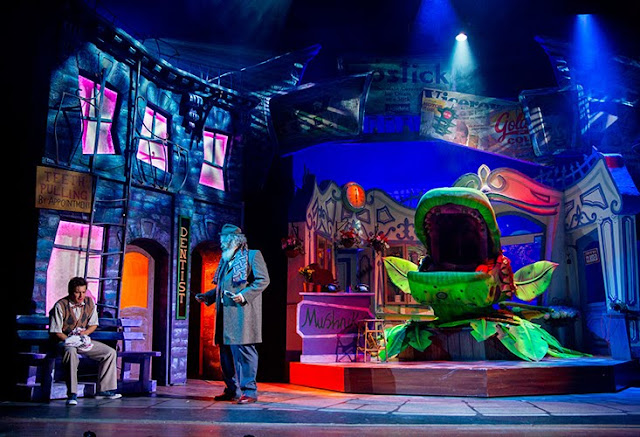 The set was absolutely incredible: with huge lit up flats, Mushnik's flower shop and of course Audrey 2, it was something you would expect of a long-running, West End production - and as someone who has performed at the Waterside many times, I know it like the back of my hand, so my question is - how on earth did they fit it all in? On a nerdy GCSE drama point though, I loved their use of levels; someone had clearly sat down and thought through the levels for some of the big numbers, which was nice to see - an example being Seymour and Audrey finishing stood on a bench with the girls around them (I forget which song it was the end of!)

Congratulations to all involved on creating such a colourful, (mostly) fun, energetic show - I don't often review UK tours, and very rarely review anything the night I've seen it, so that's a huge compliment!

Little Shop of Horrors is at the Aylesbury Waterside until Saturday, and then continues on to the rest of the tour - details of which can be found here.