Today I've teamed up with the London Musical Theatre Orchestra (yes, that's a thing that exists!) to tell you all about a one night show coming to London this December.

Despite being performed annually at the Paramount Theatre in Madison Square Garden from 1994 to 2003, 'A Christmas Carol' has never actually been performed in London... Until now! It will be making its West End debut on December 19th 2016, at the Lyric Theatre, Shaftesbury Avenue. Now here's a fun fact for you - the novella was first published on December 19th 1843, meaning that this one night performance falls on the 173rd anniversary of the book's publication! Joining the London Musical Theatre Orchestra will be a star studded West End cast, which, as far as I'm aware, is yet to be announced - watch this space!

If you've only ever heard of A Christmas Carol in the context of Charles Dickens' timeless novella of the same name, don't fret; it's actually the same story, set to music. This music is by none other that Disney and Broadway composing extraordinaire Alan Menken (Beauty and the Beast, The Little Mermaid), along with Lynn Ahrens (Ragtime, Seussical) and Mike Ockrent (Crazy For You, Me and My Girl). If you've never heard the music before, I would definitely recommend having a little listen on YouTube - it's a beautiful combination of Christmas carols (no way!) and classic Broadway songs, my favourite being "God Bless Us Everyone" which closes the show. In fact, as I write this blogpost, I've got it playing on repeat on Spotify - and I'm starting to feel the festive buzz in the middle of October!

I adore A Christmas Carol - I adored the book when I first read it back in Year 5, I adored the Jim Carrey movie that came out a few years ago, I adored the play with Jim Broadbent at the Noel Coward Theatre last Christmas, so I am SUPER DUPER excited to see this beautiful musical be brought to life in the city it's set in - Scrooge is coming home!

To find out more, go to www.lyrictheatrelondon.co.uk. 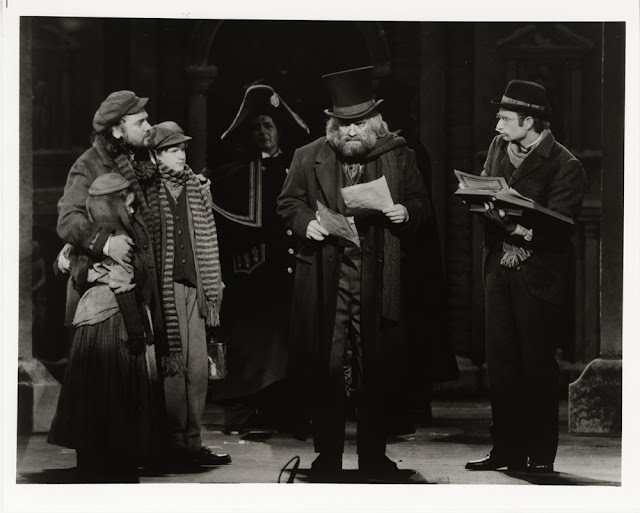 Walter Charles as Scrooge in the 1994 production of A Christmas Carol.
Posted by Em at 23:12